The Philly Half Marathon: My Worst Race Ever

By Janelle @ Run With No Regrets | injury prevention

Hey!  How about this crazy Nor’easter that blew through this week?  Thankfully, Philadelphia barely got an inch this time around, but I saw that the New York City, Connecticut and Boston areas weren’t so lucky.  If you live in those areas, I hope you and your family stays safe!

It’s Tuesday and I am joining the Tuesdays on the Run Linkup with April at Run the Great Wide Somewhere, Erika at MCM Mama Runs, and Patty at My No-Guilt Life.  This week’s theme is talking about our worst race ever and what we learned in the process.  Fortunately/unfortunately, I have a perfect candidate for the title of Worst.Race.Ever! 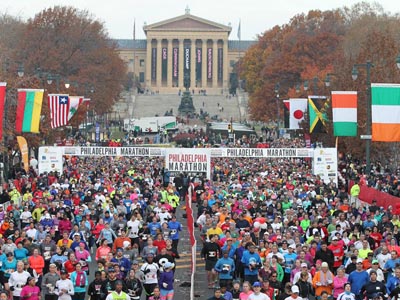 Let me set the stage leading up to the Philadelphia Half Marathon in November 2012:  This was a big year of racing for me.  The previous year was my introduction to distance running and I fell in love hard and fast.  When spring racing season came in 2012, I was ready to go!  And I signed up for a LOT of races that took place in a short period of time:

These 5 races all took place in a period of 7 weeks…which was clearly a recipe for disaster.

By the time I completed the Oddyssey Half Marathon in late May, my body had had enough.  My knees felt terrible pain during my runs and I went to see my Primary Care Physician.  Diagnosis?  Runner’s Knee.  I was set up with physical therapy, and had no choice but to demote my marathon to a half marathon.

Training for the Race

By the time I finished physical therapy, it was the end of August.  At this point, I had to find a training plan and have some semblance of preparation for a race I had already paid full price.  I didn’t do much running at all during PT…so I was literally starting from scratch.

I honestly didn’t know what I was doing.  I ran maybe a couple of days a week, and never got beyond 7 miles.  Even though I had run the distance before, I needed those long runs to truly be ready for the half.  Muscle memory did not apply here.

Around October, I bought new running shoes:  Newton Lady Isaac’s. (affiliate link)  I was obsessed with fixing my running form (because I thought this was the cause of my knee pain, NOT the overtraining!).  At the time minimalist shoes and barefoot running was very popular, touted as the “natural” way to run.  Did I mention I had NO CLUE what I was doing?

So with all of that said it’s no surprise that the race didn’t go well. My friend Sonya was also running the race and she decided to run with me.  I still feel bad that I held her back, but there’s no way I would have finished without her by my side.

We started out with a pace group.  My last half marathon was finished in under 2:20 and I think we hopped in with the 2:10 crew.  Somehow I thought this would motivate me to keep up the pace and get the race over with.  Nope, that didn’t work!  We lost them pretty quickly, and then another group, and another…

The best part of the race was around the 6 mile mark.  I was running down Chestnut street and there was Bret.  He came out and gave me a hug, so that was a very special moment for me!

But once we moved on, I just didn’t have the energy to get things going.  I never did any special fueling, so when I was tired, I had to walk.  And I walked a lot.  I was embarrased because one of my friends came out to watch me and I was walking!  I tried to pick it up but once he was out of sight I was walking again.

What is known as an amazing race in Philly was just a complete drag for me.  The weather wasn’t even that bad for late November.  I blew it, and there was no one to blame but me.

My finishing time was 2:37:01, my personal worst for the half marathon.  I was so glad for it to be over!  Thankfully I didn’t feel any pain, other than in my pride.  Thanks again Sonya for being there with me the whole way!

I learned a LOT from this experience, and these are lessons that I will never forget!  Here are my 5 takeaways.  Hopefully, this advice will be helpful to you too if you’re new to running! Me at the finish line…miserable!

I purchased this photo from the Philly Half Marathon as a reminder of what not to do when it comes to racing.  There’s no joy on my face when I finished…it was complete defeat and disappointment.  And that’s why I worked so hard to do things the right way when I trained for the Rock and Roll Philly Half Marathon in 2014!  Wow, have I come a LONG way!

Note:  I’ve also posted my review of this race on bibrave.com – it’s a free site 100% dedicated to race reviews.  I’m a BibRave Pro Ambassador for 2016, and I’d love if you considered joining the site!