Well hello!  Hope you’re enjoying the week so far.  I can’t get over the fact that we will be in September next week!

Since it’s Tuesday, I’m joining in on Tuesdays on the Run with April, Erika, and Patty.  The theme this week is running bras, so be sure to head to one of their sites and get some great resources from all the participating bloggers!

Instead of writing about running bras, I thought I’d finally share with you how I celebrated my birthday – on vacation in Charleston, South Carolina!  Bret and I had a fantastic trip! Whenever I travel, I look forward to the opportunity to run in a new setting.  It’s so easy to get bored running the same old route day after day, week after week.  Sometimes you need new scenery every once in a while!

A few weekends ago I was in Miami for a friend’s birthday, and it was almost depressing for me to not find an opportunity to run all weekend!  So there was no way that I was going to let that happen on my long-awaited vacation to Charleston!  On a trip that lasted from Friday to Wednesday, we went out for 3 runs! Seen while on the trail

Our first run in Charleston took place on Saturday morning.  For my Philly 10K training plan, I was scheduled to run 7 miles.  When researching activities for our trip, Bret “discovered” the Palmetto Trail, which is about an hour outside of Charleston.  If you know me, you know I love trail running, so I was ecstatic about this run!

When we first got to the park, it was a little bit confusing because we had to pull up to an empty station and drop $5 in an envelope for our parking permit.  Of course we didn’t have exact change, so we had to head to a gas station, then drive back.  There was also a campground in the vicinity of the trail, and we didn’t really know exactly where the Palmetto trail began.  Eventually, we figured it out! Completely engulfed in the woods on the Palmetto Trail.

As we finally got on the trail, I was really excited and ready to get in the zone.  I’ve never been in a forest of palm trees! It really was quite beautiful! The ground surface was very soft and easy to run.  The trail was well laid-out once we figured out where to go, so that made it easy to get in a groove.  And while we were out there it was completely empty…except for mosquitoes, LOTS of mosquitoes.

You may also like:  January Running Goals and December Goal Recap

We had no idea about the insect situation and were constantly swatting away the ravenous beasts.  Eventually, I realized there was no point to obsess over it and just enjoy the run.  7 miles is a long distance to run when you feel absolutely miserable, but I was in tunnel vision.  Bret requested that we turn around on multiple occasions, and apparently there were giant spiders that we passed at almost every turn (I didn’t notice).  By hook or by crook, I did reach my total distance and that’s all I cared about!  I learned that day how tough I really am when I’m focused on my goal.

So we had a VERY interesting run on the Palmetto Trail.  Next time I’ll definitely have to wear long pants and sleeves!  I really enjoyed the sights while we went around and wish I could have explored the trail further before turning back.  When we came back, my legs felt fine, but the next day I was dying from the mosquito bites, which continued during the rest of the trip.  The picture below is before they looked really ugly!  I had to have at least 50 bites…and Bret was just as bad. The WORST mosquito bites of my life, lol!

I was able to run along the gorgeous Rainbow Row twice – the first time was on Sunday (3 miles and strides), and the second was on my birthday on Tuesday (3 miles)!

Rainbow Row is a gorgeous block of Georgian-styled homes located on East Bay Street.  Every tourist has to go see it, and artists love to paint and photograph the view regularly.  Our hotel was conveniently located so that we were just a few blocks away from this lovely view, and right near the Waterfront at the Cooper River.

It was really beautiful out there, and it was nice to go out for a run and not be surrounded by tons of people, unlike every weekend run on Kelly Drive in Philly.  The runners were generally friendly too, which is always refreshing!  We passed artists and men fishing as we ran by, and spotted the most GORGEOUS homes I’ve ever seen.  I wish I was able to get a better picture of those multimillion-dollar homes along the Cooper and Ashley rivers.

My only complaint about running along this area and past the Battery Park is that the pavement was slanted on a good part of the path closest to the river, which can be troublesome for your feet and ankles. Instead, it’s easier on your body to take the sidewalk in front of the mansions or run in the street.

We had some really nice runs!  I won’t forget it anytime soon!

Loved running along the river and beautiful homes in Charleston! 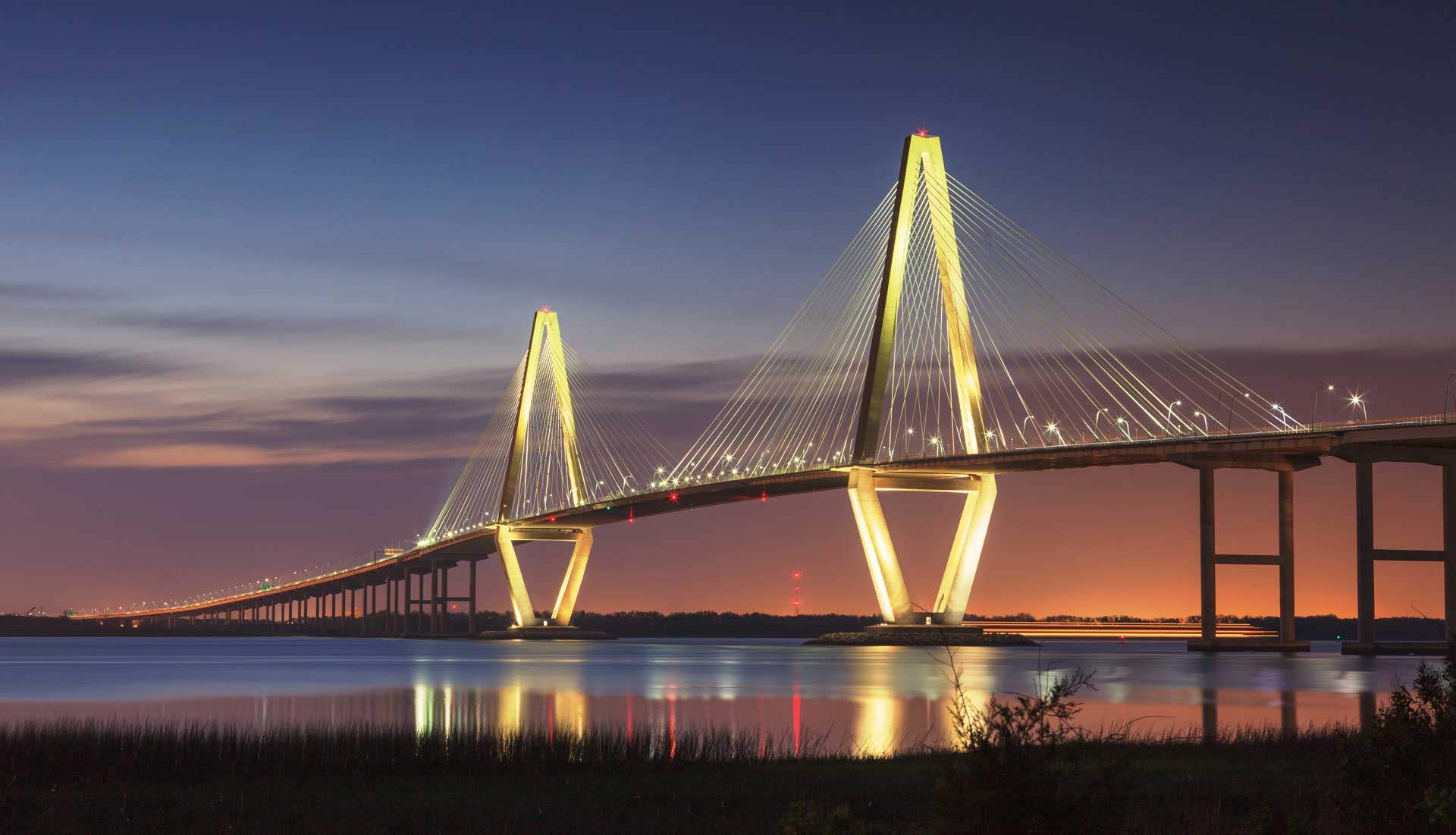 I am a little bit bummed that we didn’t get to run over the Cooper River Bridge.  First off, the design of the bridge is absolutely stunning!

We did drive over the bridge a few times to get to and from Folly Beach, and I was very envious of the runners I spotted making the climb!  Since I had already done my long run on the Palmetto trail, I didn’t really have a good opportunity to tackle this bridge.  But it will definitely be on my radar in the future!

Charleston was a fantastic trip!  I didn’t even tell you about all the great food we got to eat and the extensive history we were able to learn about.  Being able to enjoy a run while on vacation really is a blessing – I’m happy we were able to do it!

Where was one of the most interesting places you ran while on vacation?